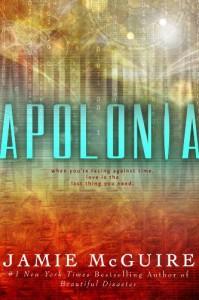 According to Goodreads, this is one of the best sci-fi books of 2014, and that's why I bought it. Spoiler alert: it's not.

Synopsis: Rory, a beautiful and unique girl, is in college trying to get her life back together after the horrible torture, rape and murder of her parents, her best friend and herself. (Yes, "murder" of herself. She's very adamant about the fact that she was killed that day.) She meets Benji and Cy, two incredibly handsome and muscular men who are immediately attracted to her. She works with Dr. Zorba, a friend of her father's, in his research of a very special rock. This research culminates on an alien invasion and the almost complete destruction of the town she lives in. Oh, yes, and she finds true love in the middle of it.

Overall enjoyment: I had to force myself to keep reading, and it was a very uncomfortable experience, with the way my eyes kept rolling almost impulsively after every sentence.

Plot: It's exactly as I described on the synopsis. The entire first half of the book is just about Rory meeting Benji and Cy, and the infantile love triangle; suddenly, there's aliens shooting up the place out of nowhere. There's very little thought dedicated to the actual sci-fi part, it seems like an afterthought. There are so many overused tropes, very badly applied, it feels like you've already read the book a thousand times.

Characters: Inconsistent at best, downright unlikable most of the time. Calling them two-dimensional is an exaggeration: they're one-dimensional, at most.

Writing style: A bunch of overused tropes and clichés put together. There were a lot of inconsistencies with that, too: sometimes everyone sounds very formal and uptight, right after that they curse constantly, and then they become intimate and colloquial enough to seem sleazy. There are cringe-worthy attempts at humor, exaggerated attempts at drama, a completely unnecessary sex scene and such desperate attempts to make Rory relateable that she ends up not being a character at all. There are also many narrative inconsistencies; for instance the thing about Rory being killed. At first I thought it was symbolism for her old personality being killed by her trauma, but then she makes it very clear that she actually died and then came back. I was expecting it to be used later in the story, and it just isn't, it's almost like she forgot about it. And the plot twists are absurd to the point of comical.

Representation: Inexistent for all minorities (unless you count unconscious children being tortured representation). There is an insinuation that Rory might be bisexual, but the context in which it is presented is very negative. She is describing all the degradation Rory put herself through right after her trauma, and she makes it seem like that is not something anyone sane and healthy would do. There is also a staggering lack of female characters; besides Rory, there are two aliens who barely talk and have no actual personality to speak of and one who is an evil bitch.

Political correctness: There was so much misogyny in this book it was painful to read. Starting with the completely unnecessary sexual trauma Rory went through (which is badly characterized), going on with constant slut-shaming and bitch-shaming (women who complain are worthless) and topping it off with Rory being surrounded and defined by the male characters. Both Benji and Cy are emotionally abusive and display stalker behavior, and that is presented as being the most romantic thing that could happen. There is an enormous warped sense of priorities: Rory is being chased by soldiers into a space ship that was incinerating the city and the foremost thought in her head is annoyance that the alien girl is so pretty. Even the sex scene is incredibly misogynistic: she describes Rory going down on Benji in detail, but he makes no attempt at foreplay on her at all and assumes she's excited enough and ready to be fucked just because he allowed her to suck his dick.

I know I'm being very mean in this particular review, but I'm getting really tired of this kind of book. Maybe that's a consequence of the challenge already, in the most other books I've read women being treated as people is a basis. I probably would have given up on this book if it weren't for the challenge, though. I'm honestly just pissed off that what little free time I have right now was taken up by reading this.

Up next: Dreams of Gods & Monsters, by Laini Taylor