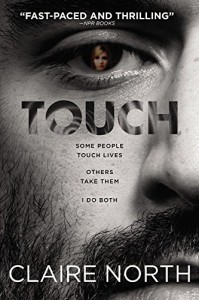 Recommended by Julian. I should know better than to judge a book by its cover by now, but, before I started reading it, I thought it would be a YA sci-fi. Maybe it was because the eyes look somewhat feminine and young, maybe it was “YOUR LIFE HAS ALREADY BEEN TAKEN”, maybe it was the fact that it was tagged as “science fiction” and “paranormal”, maybe it was the fact that Claire North is a pseudonym for Catherine Webb (even though I’ve never read any of Webb’s books, I know she’s famous as a YA author), probably it was all of those combined with some internalized misogyny of my own; the fact is that I fully expected some dystopian future when our brave heroine had to fight for survival/freedom/family while falling in love with some random boy. I could not have been more wrong...

Synopsis: Kepler is an entity that can travel from body to body with a touch. This isn’t always a forceful procedure, Kepler can come to agreements with the hosts, and even come to love them. Josephine Cebule is one such, and, when she is murdered, Kepler realizes that Josephine was not the murderer’s only target.

Overall enjoyment: I was pleasantly surprised when I found this book wasn’t a childish romance posing as science fiction, and then became enthralled with the story, the suspense, the characters, and the hypothesis. This is a very satisfying book to read, and kept me turning the pages to the very end.

Plot: It’s very well thought out and developed. There is tons of suspense, many twisty plot twists, all of them connected and foreshadowed. It is an actually thrilling thriller, where the characters go out and do stuff, instead of just watching things happen around them (I’ve read way too many of the latter recently...).

Characters: Quite well developed, especially Kepler. I especially enjoyed the relationships and reactions, they all felt very real.

World/setting: It wasn’t very science-fiction-y. However, I don’t think this book is science fiction at all... The “paranormal” category would be the most adequate for it, but it’s still not quite right because of the romance that is immediately associated with it. I’d have to go with psycho-thriller with *some* fantasy elements. Anyway, the setting is modern and urban; not much weird stuff going on with the world itself, only Kepler is special.

Writing style: Straightforward and clean. Very adequate, easy to read and adds urgency to the text.

Representation: Kepler, being able to inhabit any body, is very fluid when it comes to sexuality and gender. I love that she simply doesn’t inform you if, when Kepler was alive, they were a woman or a man. It just doesn’t matter, since Kepler is both and neither. Kepler loves people regardless of their gender, too.

Political correctness: Not only was Kepler an interesting character, but she also plays with questions of gender and sexuality around them. A very nice and intriguing read.

Up next: A Stranger in Olondria, by Sofia Samatar