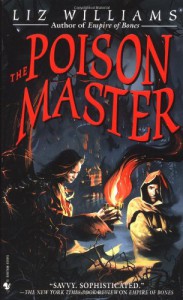 94. THE POISON MASTER, BY LIZ WILLIAMS

Recommended by Miriam for its great world building. She warned me that there were stuff I wouldn’t like about the characters, though. She was right.

Synopsis: Alivet lives on Latent Emanation, a planet where humans are slaves to the Lords of Night. She’s an apprentice alchemist, and is planning to save up enough so she can buy her twin sister from “embonding”, but when one of her rich clients die, she’s forced to seek the help of stranger.

Overall enjoyment: Welp. There were some really nice things. There were some very bad things. Mostly, and I’m going to have to caps it, THERE SHOULD NOT HAVE BEEN ROMANCE IN THIS BOOK. The romance with Ghairen was bizarre and grotesque, and it should never have been written. Other than that, it was fine.

Plot: I liked how she tells the story of Alivet in parallel with John Dee, showing how Latent Emanation came to be in the first place. It integrates the world building with the main plot without making it over-descriptive and boring. The intrigue and mystery part was also nicely done. The only thing that sucked was the romance. It comes out of nowhere, it’s badly developed, and has a nonsensical conclusion.

Characters: Up to a point, they were nicely done. Alivet is capable without being super-human, resourceful without being unrealistic, courageous without being stupid. Once again, the only bad part was the romance. It seemed like Alivet had a double personality: one who went through the story, and another whose sole purpose was to get horny whenever Ghairen was around. Her reactions to him were so out of character and artificial, one way this book could be fixed is if someone went through the text simply deleting all those passages. They are completely unconnected to the rest, have no part whatsoever on their character development, and would probably not be missed by anyone (much less the characters themselves).

World/setting: The main part, the one everyone who reads this book compliments. It is, indeed, quite a nice piece of world building. She mixes science-fiction with alchemy and fantasy, and a bit of religion for good measure. Some aspects could have been more explained, or better exploited (I would have liked to know more about the native races of those other worlds, for instance), but that would have been a plus, not a necessity.

Writing style: WHY DID THERE HAVE TO BE ROMANCE IN THIS?? My honest theory is that Liz had already finished writing her book, but when she tried to submit it for publication, someone (maybe the editor) told her she absolutely HAD to have romance in it, since it’s YA. So she went back and tried to see where she could shove some kind of romance. Maybe she thought about Alivet and Ghairen’s daughter, but decided against it. Finally, she decided it had to be Alivet and Ghairen, and then tried to make it happen, but she was already in love with the original story, so she didn’t want to change anything. That is the most likely explanation for how bizarre those romance passages are… On the other passages, though, the writing is pleasant and straightforward.

Representation: There isn’t much… There are aliens, though.

Political correctness: Again, WHAT THE HELL WAS GOING ON WITH THAT ROMANCE?? It was all kinds of crappy. He’s domineering, over-controlling, he locks her up on her room at night, and actually shackles her to him once. He doesn’t trust her, or tells her anything. Oh, yeah, also, SHE’S 16 AND HE’S OVER 40!! And don’t tell me that his species experiences time differently, HE HAS A DAUGHTER WHO’S ONLY ONE OR TWO YEARS YOUNGER THAN ALIVET HERSELF. That’s just disgusting. Speaking of disgusting, the very first time that they kind of get it on ALIVET BELIEVES HE IS RAPING HIS DAUGHTER. Really. For serious. Because, of course, there is nothing like a child molester to get a girl’s juices flowing, am I right, ladies?

Up next: How to Be a Heroine, by Samantha Ellis