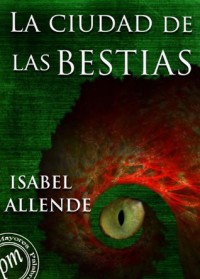 102. CITY OF THE BEASTS, BY ISABEL ALLENDE (Book 1 of Eagle and Jaguar)

This was my first full-length novel to be read in Spanish! That alone should cause me some happiness... It was recommended by a friend of mine who said it would be adequate for its purpose -- you can’t start off in a language by reading classics, or very complex books; the language has to be somewhat simple, so you won’t have too much difficulty or be discouraged, and it has to have something of a pace, so that you will feel compelled to carry on.

Synopsis: Alexander Cold, an average American boy whose mother is suffering from cancer, is forced to go live with his paternal grandmother. She takes him with her in an expedition to the heart of the Amazon jungle, where he meets Nadia Santos, a precocious Brazilian girl, and they both embark in a jungle adventure.

Overall enjoyment: It served its purpose vis-à-vis getting me through a whole book in Spanish. It was a bit standard, though. It ticked all the boxes for a YA adventure, but didn’t do much else. It was very simplistic and over-explained, and followed something like a standardized formula: bratty boy teams up with much cooler girl, they face dangers, and he grows up in the process. It was very safe and kinda boring. Running the risk of sounding corny, I’d say it lacked heart.

Plot: I’ve already surmised it above, formulaic YA stuff. I know it’s also a characteristic of YA, but things are very over-explained. To the point where it sounds a bit ridiculous, with characters discussing plot points when it makes no sense for them to do so. Also, some threads are resolved very hurriedly and in a haphazard manner. Could’ve been better.

Characters: Quite stereotypical. They don’t go much further than two dimensions. And Alex starts off seeming way too young: he’s too bratty, clueless, insensitive, and sexually unaware to be a 15 year old boy; he seems to be 12, at most. I realize she wanted to show character growth, but it could have been more subtle. Or, she could have developed her characters better...

World/setting: The Amazon jungle, and then the mythical El Dorado. It was... standard. I’ll give her credit for, at the very least, doing some research and not putting lions and elephants on it; the animal and plant species she mentions are geographically correct. The tribe she mentions doesn’t really resemble any particular South American native tribe, but they’re close enough in general to be a fictional tribe.

Writing style: Like I said, this was the first time I’ve read a book in Spanish. I really don’t think I’m familiar enough with the language to judge style, yet. It was easy enough to understand; there weren’t many figures of speech or any complex syntax.

Representation: There were a few natives. But, in general, very poor.

Political correctness: Well... It was the standard YA adventure novel. With all its problems, too. To start with, she’s Chilean, she’s writing in Spanish, the book is set in the frontier between Brazil and Venezuela; why the hell is the protagonist American? It’s not necessary to the plot, or anything. Then, you have the “indians” being consistently and unironically described as “primitive”; the protagonist not really being involved with his surroundings, but rather seeing everything as “exotic” and “alien”, and the classic Tarzan formula. With the exception of Walimaí, who is a shaman and very much alien, the whole tribe is treated as a whole, you have no “indian” characters. And I don’t even want to get into the feminist analysis of if, with such stereotyped female characters and a possible future love interest for Alex who actually is 12 (but it’s okay, she’s so precocious!) and who is compared to every woman in his life.